I’m going to break everything down for you including what they sell, how much is costs to join, what their compensation plan is like, positive reviews and complaints and more.

We’ll then determine if Origami Owl is a pyramid scheme, or a completely legitimate way to do business.

What is Origami Owl?

Origami Owl is a jewelry multi-level marketing (MLM) company that was started in 2011 by Bella Weems. The story goes that she had to create enough income to buy her own car at the age of 16. She began creating jewelry designs that people loved and, as time went on, and with the help of her co-founders (Chrissy Weems, Tyson Basha and Shawn Maxwell), moved to direct selling to help keep up with demand.

Origami Owl has products that include:

They also have a locket builder where you can customize a locket by choosing charms and gemstones that are meaningful to you.

How Much Does it Cost to Join Origami Owl?

In order to become a Designer (independent consultant), you will need to pick a kit. There are three to choose from:

This is the basic kit and includes:

The Happy Holla Days kit is the mid-range kit and includes:

The DIY Kit is the highest-priced kit, but it is customizable for your needs:

Here’s an unboxing so you can see some of Origami’s Owl’s stuff.

You also need to have at least 75PV (personal volume) in a month after your first month to be considered active. You can sell this amount to others, or buy it yourself.

There are 15 different rank levels in this compensation plan.

In order to be considered an active Designer, you need to have at least 75PV in a month, as mentioned above.

There are a couple of ways to earn with Origami Owl.

As you build a team and generate more sales, you will be promoted to the different ranks, as shown above. Each rank has its own requirements and sales goals.

See the full compensation plan for details, or you can watch this YouTube video for an explanation:

You can see Origami Owl’s full Income Disclosure here. It includes this chart: 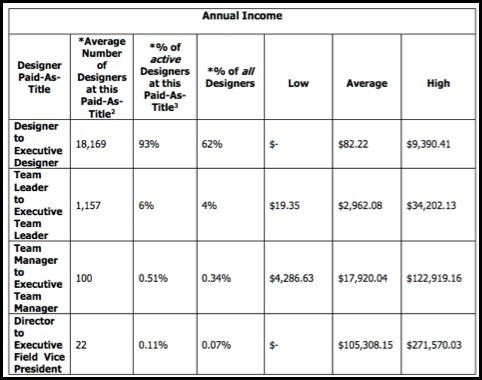 Keep in mind that this is the annual income of Origami Owl designers and this is also before incurring any business expenses.

Unless you’re one of the 22 people in those top ranks, you’re really not making a significant income. Even Team Managers to Executive Team Managers only average about $18,000 a year. That’s not enough to live on. And they probably worked their asses off to get there.

And that only represents half a percent of Origami Owl’s Designers.

Unfortunately, this is a typical MLM income disclosure. Almost no one makes money in an MLM.

As with every company, there will always be positive reviews and complaints. Let’s take a look at what people are saying about Origami Owl.

On the positive side, people have said:

And here are some Origami Owl complaints that I’ve seen:

Here’s a complaint from a former Designer who had some choice things to say about working for Origami Owl:

Here’s an overview of the BBB rating and reviews:

Is Origami Owl a Pyramid Scheme?

Technically, Origami Owl is not a pyramid scheme. They do have an actual product that can be sold retail to customers. It always gets a little dicey if it becomes more important to recruit people than to sell your products retail. The problem with MLMs is that you almost need to build a team to make any significant income

There does seem to be a big push for Origami Owl to sell their items retail via home parties, so maybe they’ll be OK long-term if they can get their customer service issues together. But you always have to be a little wary when you’re in an MLM. Just because you’re not considered a pyramid scheme now doesn’t mean that will always be the case. Just look at Advocare.

MLMs are just a tough business model in general. Not only are people super skeptical of them (plenty of people think all MLMs are scams and pyramid schemes), but once you do convince people to join you, you have to continuously stay on top of them to make sure they’re duplicating your effort. And chances are, they aren’t and don’t wanna. Because it’s HARD!

Maybe you’re looking into Origami Owl because you were thinking of joining? You wanted to check it out before making a decision. I think that’s smart. Because MLMs really are tough to work. Maybe some people just have a natural ability to work in one, but for most people it’s not going to be easy. (Which is why 99% of people don’t make money in them.)

If you like the idea of working for yourself and having money AND time freedom, then let me suggest an alternative. I was in an MLM recently and couldn’t stop bleeding money.

You don’t have to worry about recruiting, uplines, downlines, compensation plans, inventory, customer service, or any of that stuff. You don’t need to contact all your friends and family and you don’t need to have home parties or post anything on Facebook.

Click Here to Read Why Affiliate Marketing is a 100x Better Opportunity Than Any MLM!

Affiliate marketing is promoting other people’s products for a commission. You should never have to pay money to join an affiliate program. And you won’t need to chase sales because you learn how to attract customers to YOU. Even better, you can promote anything you like – from jewelry to mountain bikes to rabbit cages. Whatever interests you!

Sound interesting? Click here so I can show you how it all works.

Is Origami Owl a pyramid scheme? No, it’s not. At least by the FTC’s standards. (Yet.) Would I recommend you join Origami Owl as a Designer? I wouldn’t. Not only because of their customer service issues (and perhaps they’ve cleared some of those up by now), but mostly because MLMs are not great businesses to join.

If you like the idea of working for yourself, but would like something a little easier to manage, I always recommend affiliate marketing. Click here so I can give you more details.