Maybe you’ve seen the company Vector Marketing and now you’re wondering if it’s an MLM, or a scam? Perhaps you even have an interview scheduled with them, or are thinking about trying to get one?

I’m going to help you answer all of your questions and tell you whether or not it makes sense to go on that interview.

I’ll show you the numbers of what you can make with this business opportunity and tell you if it’s worth it or not.

Let’s get right into it!

What is Vector Marketing?

Vector Marketing is the sales and marketing division for the knife company, Cutco. It was founded in 1981 in Philadelphia, PA by Don Freda. Freda trained Albert DiLeonardo, who is now a part of the executive team along with Bruce Goodman and John Whelpley.

Vector Marketing reaches out to recent high school grads and college students and trains them to learn how to sell Cutco knives.

The reps are independent contractors who earn commissions based on the sales that they make and they also earn a base pay when they demonstrate the knives to potential customers.

Cutco provides high-quality knives that are made in the USA.

How Much Does it Cost to Join Vector Marketing?

Originally, sales reps had to purchase their own knife set for demonstrations, which was about $150 + tax. However, Vector Marketing has since changed that practice and they give out loaner knives to new reps. As long as they remain active, they can use the loaner knives. If they become inactive, they have to send the knives back.

Therefore, there isn’t a cost to join Vector Marketing.

As far as I could see, Vector Marketing doesn’t have a compensation plan posted on its site. They mentioned that the person you interview with will break down the pay structure for you.

He said you can make up to 40% commission based on your sales volume. He also said it takes about 6-10 appointments to sell around $1,000.

(Take this all with a grain of salt as it’s not official from the company.)

You do get paid for demonstrating the knives, but it has to be a “qualified” demonstration. I have seen a few different numbers, but it looks like they’re currently paying around $18 per qualified demonstration. According to Vector Marketing, they give reps this pay so that they don’t feel pressured to be pushy.

It doesn’t look like Vector Marketing has posted an income disclosure, so it’s hard to verify how much their sales reps are making on average.

I did find this interesting page on TruthinAdvertising.org. They did an audit of income claims made by every member of the DSA and showed that 97% of them made unsubstantiated or false claims in order to make their business opportunities look more appealing.

Vector Marketing is no different. They have 12 claims listed here.

The first link that’s shown is someone who posted on Facebook that he sold $100,000 worth of Cutco in just 3 and 1/2 months. Apparently, this can’t be verified as a true claim.

Let’s Do Some Math

Assuming that the sales percentages are correct from the YouTuber’s comment, I think we can do a little math to see if you can make a good living with Vector Marketing.

He said it takes about 6-10 appointments to make about $1000 in sales. Let’s give these sales reps the benefit of the doubt and say it only takes 6 appointments.

First, how many phone calls will you have to make in order to get 6 appointments? Let’s say that 1 out of every 100 people will say yes to an appointment. (I think that’s pretty standard for sales.)

So you’ll need to contact 600 people in order to get 6 appointments. I can’t say 100% for sure how long that will take, but let’s say you’re really ambitious and you make 100 phone calls in a day. That will take you 6 days to make 600 phone calls.

Now we have to factor in the time it takes you to go to the appointments and do the demonstrations. Let’s say they’re 2 hours each because you also have to drive there and back.

(Note: you don’t get reimbursed for travel expenses or any other expenses you incur. You also have mandatory training and you are not paid for that either. And you’ll see below that not all demonstrations are considered qualified.)

Here’s where things get interesting with Vector Marketing. They have so many complaints against them that it’s almost impossible to find people saying anything positive about them.

The one positive thing that people say is that Cutco knives are actually really good. They’re made in the USA, the quality is excellent and they have a Forever Guarantee.

Too bad they’re connected to this shady company.

The biggest complaint with Vector Marketing is that it uses terrible recruiting practices to lure college students in. They post flyers on campuses that seem like Vector Marketing is a “real”, hourly-wage job. When the students show up to the interview, they learn it’s something completely different.

With the power of the internet, I don’t even know how Vector Marketing is still recruiting people. I did some simple searches on YouTube and Google looking for information on the company, and there are just tons of people posting about their bad experiences.

Let’s take a closer look at the complaints.

I always like to take a look at the BBB website to see what’s happening with a company. You can learn a lot just from going there and reading through the reviews and complaints. They are accredited with the BBB and they have an A+ rating. You can see the customer reviews are not great.

The positive reviews are mostly of people saying they like the knives.

To be fair, for the official complaints, Vector Marketing does respond and try to solve the issues.

On Indeed.com, there’s a forum and there are pages and pages of people talking about Vector Marketing. The vast majority of these posts are not favorable. You can see that thread here.

Vector Marketing has 85 reviews on ConsumerAffairs.com and has a 1.5-star rating. Yikes! 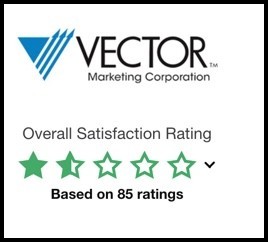 I recommend taking the time to read Ellie’s story of her time with Vector Marketing. It’s quite eye-opening.

I’ll give you the short and sweet version. She said that she went for the interview and was hired immediately. She said she also had to go to training immediately and discovered that it was without pay. She said she had to start doing demos immediately (that weekend after the 3 days of training).

She said they wanted them to target “MAC” customers and “MACK” customers are even better:

She said they had to have a minimum of 6 appointments in that first weekend, and she only had 4 and they were going to fire her. She agreed the job wasn’t for her and wanted to know about her payment for the 4 demonstrations she did. They ended up not paying her because none of her appointments were “qualified.”

YouTube is probably my favorite place to learn about Vector Marketing because it’s full of people sharing their personal experiences. There were actually a couple of positive videos, but the bad far outweighs the good.

Here are some accounts of what happened to people who either went to the Vector Marketing interviews or tried to work for them as reps.

I could go on and on and on with complaints from people who feel duped by this company.

Is Vector Marketing an MLM?

Now the big question – is Vector Marketing an MLM? This is actually harder to answer than you would think. Many people call them an MLM. Vector Marketing says that they’re not because they only pay on one level. Here’s what they say on their website:

They only have one level, but apparently they have bonuses and gifts for recruiting others, but I didn’t find anything specific on it.

So, while they do get lumped in with MLMs a lot because they act similar to one, I would say Vector Marketing is not technically an MLM.

Is Vector Marketing a Scam?

The tactics to get people in the door are really slimy. (In my opinion, of course.)

I also read that they ask you to contact all of your friends and family to demonstrate the knives to them. And they also tell you to get referrals from them. They don’t provide any referrals for you.

What happens when you run out of people to contact?

An Alternative to Vector Marketing

I honestly don’t even understand Vector Marketing and why they use these odd recruiting practices. Why target college students? Why be so shady about the “job”? Why not just be upfront about what you will be doing? Is it because no one will join? It doesn’t seem like a great idea to trick people into something, but what do I know?

We have the internet now.

If you want to sell something, why not just do your own thing and sell stuff online?

My favorite way to do this is through affiliate marketing. I teach you more about it here, but it’s basically selling other people’s stuff for a commission.

It’s like Vector Marketing, but YOU choose the products to promote and you don’t have to do any demonstrations. It’s all online. (or YouTube if you like that.)

The commissions can be anywhere from 8% – 50% or more, depending on what you’re promoting. And that’s without:

It’s all done on your own time, in your own way. No knives necessary! (Unless you like to promote them, and you definitely could with affiliate marketing!)

Vector Marketing certainly has its downsides, and you’ll see that if you do a quick search in Google of them. I can’t say that they’re an MLM exactly, although they do a lot of the same shady things as most MLMs and I think that’s why people say that. (Since they only pay on sales commissions, they’re not technically an MLM. I think some people use the term MLM to just mean direct selling companies that they don’t trust.)

Whether Vector Marketing is a scam or not is up for debate. Even though, from my research, it looks as if at least 95% of people would say yes. And that’s due to their super shady recruiting tactics.

If you like the idea of selling without all the scammy crap. This platform can show you exactly how to do it online – using a topic that you enjoy – step by step.

Whether affiliate marketing is an interest to you or not, I would advise you to stay away from Vector Marketing. There are just way too many negative reports to take it seriously. And you’re not going to make enough money for the work anyway. Not even close.

Any cookies that may not be particularly necessary for the website to function and is used specifically to collect user personal data via analytics, ads, other embedded contents are termed as non-necessary cookies. It is mandatory to procure user consent prior to running these cookies on your website.