There have been a couple of times when I’ve had to put my tail between my legs and admit defeat in shame. Once was when I stopped being vegan. The second time is when I quit Young Living.

I’m going to give you a little background on my Young Living experience, and I’ll tell you why I’m reviewing so many MLM opportunities on my site and why I’m now so anti-MLM.

How It All Started

When I was in my 20s, I worked in a photo lab (RIP Motophoto) and we had this club where we would try to get people to sign up. One month the owner decided to have a contest. Whoever could sell the most of those clubs would get a free day off.

That’s because I love a good challenge and I also love making extra money!

Back to where I got into Young Living…

I was having this mental itch that I wanted to sell something, but I didn’t know what. I asked in a Facebook group that I’m in about network marketing / MLMs.

I don’t think I’ve ever had that many responses to anything in my life.

Now I understand why there were so many people (vultures?) ready and willing to help me.

533 women who all “absolutely love” network marketing because “it’s truly changed my life” and “it allows me to stay home with my kids.”

I wanted to go with a company that was natural and health-related because I was vegan at that time and I thought it would be a good match.

A woman messaged me (also named Christina, which was funny) and told me about Young Living.

Just a side note: I have absolutely nothing against her or anyone in the team I was on. They are really nice people who I enjoyed working with.

Have you seen this term “hunbot”? It’s a term that anti-MLM’ers used when describing someone in an MLM. These are the people that message you and say things like, “Hi hun. I love your profile, so I thought we could connect.”

They usually have scripts of what to say to people. Sometimes they’re wildly inappropriate because they don’t actually know the person so they say something about them that’s completely off. Usually, they’re just really annoying. Here’s an example.

It’s not really their fault. It’s what we’re trained to do.

I did the same thing, although, I wasn’t good at it and barely messaged anyone. (Sorry to anyone I did message if you happen to be reading this. I was an idiot.)

But I did the super annoying posts. This was a post I did in the same Facebook group where I asked about network marketing. This post shouldn’t be in there and wow – it’s dumb anyway! lol 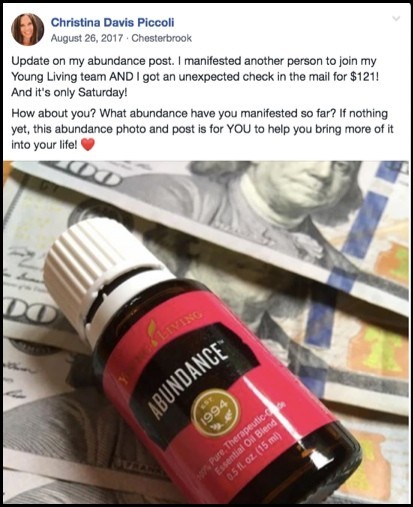 And look at this crap: 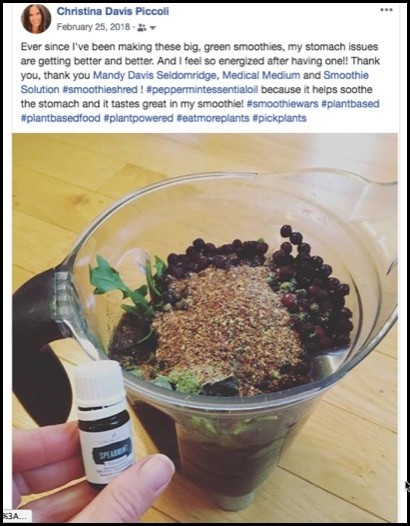 In case you can’t read it, it says, “Ever since I’ve been making these big, green smoothies, my stomach issues are getting better and better. And I feel energized after having one!”

There are a couple of things wrong here:

I just want to talk about this for a second. I used to add oils – all kinds of them – to my tea, smoothies water and even wine once! Maybe it’s perfectly fine. The problem is, I don’t know. I was just listening to my upline who assured me it’s fine.

I recently went to the doctor for my stomach issues to have some tests done. (It’s much, much better after stopping being vegan, thankfully.) She said I have gastritis (inflammation of the lining of the stomach) and one of the things that can make it worse is peppermint.

I knew there was an issue with it when not that long ago I just added a drop to my tongue to freshen my breath. I suffered from heartburn for the rest of the day.

These oils are potent!

How Much Money I Made with Young Living

I tried to make it look like I made money with Young Living.

Oh, they sent me a couple of checks. 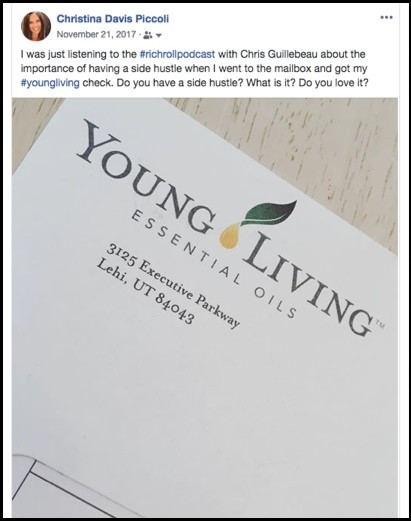 They were never more than a hundred dollars or so.

They had this deal where if you spent a certain amount of PVs in a month, you would get free products. (PV stands for Personal Volume. 1 PV was around $1.)

When you spent 300PV or more, you would get all the free products for that month, about 5 or 6 of them.

In the Facebook training groups I was in, the uplines would cause a frenzy about getting these free products. They would make it sound so exciting like you just HAD to do it or you would be missing out.

They had their marketing tactics down.

I hope they enjoyed their paycheck from all my sales.

I know someone in an MLM reading this and will either think to themselves or tell me straight up that I didn’t work hard enough.

(That’s basically what I was told in the comments of my Farmasi post.)

It’s funny because when you’re a vegan / plant-based and you end up stopping because of health issues, you are told that you didn’t do it right.

The thing is, it’s hard to do MLMs right because they’re almost impossible to make successful.

Since I’ve been researching different MLMs on my site, I realize what a terrible business model it is for 99% of the people in them.

According to this report on the FTC’s website, more than 99% of people lose money in an MLM.

This is the only paragraph you need to read: 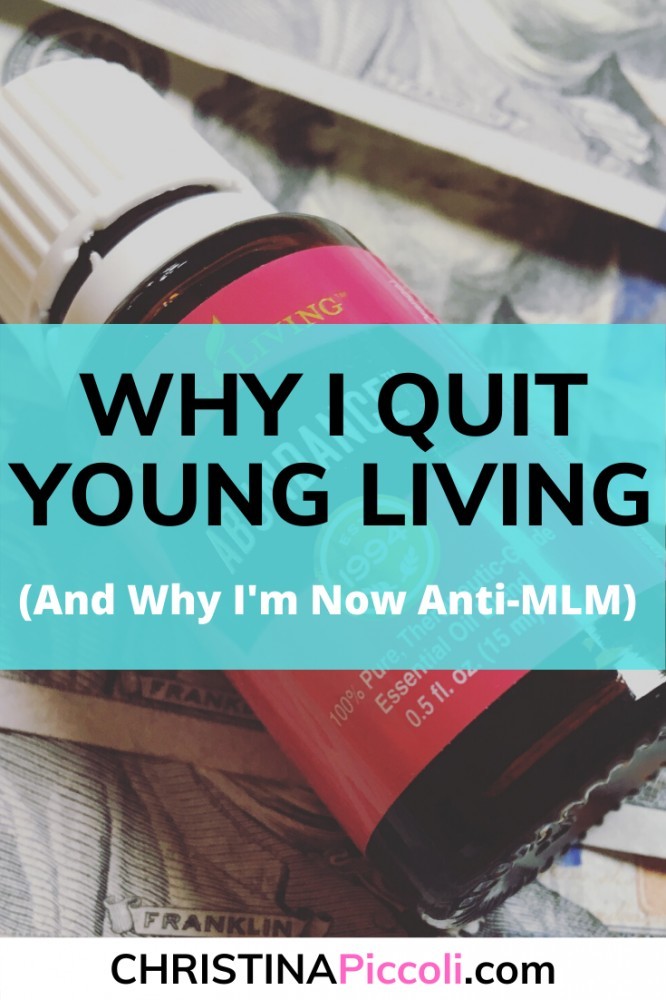 This is why I’m now so anti-MLM, and why I’ve aligned myself with that movement.

What I’ve come to understand is that when you’re in an MLM and you’re at the bottom, you’re nothing but a customer to your upline.

There are no retail customers (for most MLMs). YOU are the customer buying products.

That’s why recruiting is so important. There are few MLMs where you can make a good living just by selling products.

And when recruiting is more important and more lucrative than selling products, you land yourself in pyramid scheme territory. Is Young Living a pyramid scheme?

All I’ll say is that they are being sued for being a “cult-like pyramid scheme.” It’s up to the FTC to decide if it’s true or not. I hope the people at the top are prepared. They could lose their #bossbabe incomes in an instant like those in AdvoCare recently did.

I don’t wish that on anyone, but it’s a reality that could easily be faced…

There is Good News

There is something great that came out of being in Young Living. It brought me back to my real passion – affiliate marketing.

When I was working the Young Living business, I knew instead of messaging people out of the blue, I could instead set up a website and use what I learned from affiliate marketing to create reviews around the products and attract interested people to me.

My reviews got some traction.

But not 1 person bought anything.

It’s not surprising because Young Living oils are highly overpriced!

I slowly started to move away from Young Living and began my way back to Wealthy Affiliate and re-learning the affiliate marketing process. That’s when I set up this website (and a couple of others) and have been so much more satisfied since.

Affiliate marketing is a way to work for yourself and not have to recruit and train salespeople or worry about inventory. And it’s perfect for us introverts because we don’t have to talk to a soul! 🙂

I never actually quit Young Living officially. In fact, I may still be a member, I don’t know! I started selling off my unopened inventory on eBay, and I’m pretty sure that’s a violation of their terms and conditions, so that’s that.

I actually liked a lot of their products. In fact, their Thieves toothpaste is the best deodorant I’ve ever used. (Yes, for real.) If only they weren’t an MLM…

I think essential oils, in general, are great and have a lot of benefits. I continue to diffuse them because they do smell really good.

I just think from now on, I’ll buy them from a reputable (and MUCH less expensive) place.

There are plenty, despite what my upline tried to tell me.

If you’re thinking about joining an MLM, please do your research. I have loads of MLMs that I look at here. They all tell the same story. It’s too hard to make money, and you’ll most likely lose money.

If you like the idea of selling something online, but in a much more chill way, then I would highly recommend affiliate marketing instead. I can help you get started.

Since I’ve been involving myself in the anti-MLM community, I have found some great resources of places to find other anti-MLM content. These are some of my favorites.

I’m sure this list will grow as time goes on, and if you’re an anti-MLM’er and you have more suggestions, leave them for me in the comments below.

Here’s one more thing I’ll leave you with. This is Dave Ramsey talking about MLMs, and I like the way he describes it. It’s not a makeup and beauty job (or whatever product the MLM is selling), it’s a recruiting and training job where you have to work more than full time. He makes it sound so unappealing. And that’s because it is.