Welcome to my Clout Pay review!

If you’ve been on my site recently (like yesterday), then you may be thinking that you’re having a bit of deja vu. Or perhaps you think I’m going insane because I’ve already reviewed this program.

I’m not going insane. (yet)

Yesterday I did a Clout Bucks review, and today we’re doing a Clout Pay review.

You are right in thinking that these programs are very, very similar. In fact, I’m sure that they’re run by the same people, trying to get even more victims to fall for this scam.

Why is it a scam?

Let’s dive into this Clout Pay review and I’ll show you.

Summary: It’s tempting to join a website that promises that you can make big bucks with little work, but there’s a reason for that saying “If it sounds too good to be true…” You might think to yourself, “Well, this is free to join, so there’s no downside.” And that’s exactly what the creators of Clout Pay want you to think. Because what they’re looking for is your data. They can use your data to sell to other scammers. Be very careful before joining.

I absolutely do not recommend you sign up for this site. If you’re already signed up, I’ll leave instructions below of some steps you can take to protect yourself.

What is Clout Pay?

Clout Pay is a “get paid to” (GPT) and affiliate website. They claim that you can use your social media influence and sign up your friends. Each friend you sign up will earn you $10-$15. The homepage of their website clearly says that you can “Make $500 Today!”

They even offer to give you a sign up bonus of $25, which sounds very generous. The problem is, you’ll never see that money or any money. Keep reading and I’ll explain a little later…

As I mentioned, I’ve already reviewed the site Clout Bucks, which is almost an exact replica of Clout Pay. Not only that, but there have been several sites that are almost exactly the same that I’ve reviewed. They are:

Have you seen any of these? If not, that’s a good thing. They are all a part of the same network of scam sites (and I’m sure there are even more out there).

One of the biggest red flags for Clout Pay and the other sites I mentioned above is that we have no idea who is behind them.

What’s really funny is that in my Kids Earn Cash review, I showed an image that I found on Twitter of the supposed CEO of that site.

His name there is Justin Sodos, and the image depicts him as being one of “Forbes Millionaires Under 25.” But there is zero evidence of anyone named Justin Sodos on any Forbes list.

We’re not going to find out who’s really behind Clout Pay or any of these other sites because this is a scam and scammers do not like getting caught.

Why So Many Different Sites?

In case you’re wondering why there would be so many of these different websites out there, the reason is that people catch on to them being scams.

Once too many people get word that the site is a scam, they remove it, and put up another one just like it with a new name and new branding. This allows them to trick even more people into signing up.

In fact, once too many people know that Clout Pay is a scam, it will likely be removed and we’ll see something else take its place.

How Does Clout Pay Work?

I didn’t take the time to sign up and go through the entire site, but I did do that when I reviewed Kids Earn Cash, so you can take a look at that if you’d like to get a better look of what’s inside the member’s area.

Again, these are all cookie-cutter websites, and therefore they will all have the same “stuff” inside.

Within the membership area, you will get an affiliate link, or share link. This is the link you use to share with  your friends in order to earn the $10 per sign up.

Since this is a GPT site, you can also complete tasks to earn money. These tasks are things like filling out surveys or downloading apps.

I know you’re thinking this sounds good and legit, but I assure you, it’s not. Let’s talk about these tasks for a sec:

The real purpose of Clout Pay is to:

Why do they want your data? So they can sell it. Scammers love to have information from people who are looking to make easy money because they know that those type of people will be easy prey for more scams.

(This is why I’m happy you’re doing your research…)

There is a chance that they will try to use your password to see if you use the same password on other sites so they can steal even more of your information.

Is ​Clout ​Pay a Scam or Legit?

Just like Clout Bucks, and all the others, Clout Pay is a scam. I reallllyyy don’t like to call something a scam unless I’m sure, and this time I’m sure. Even on the tiny, tiny, minuscule chance that it’s not a scam, it’s still not worth signing up for.

Let’s talk about some of the other issues we have with Clout Pay.

Besides not knowing who owns the site, another huge red flag is that the testimonials on the site are completely faked. That means no one is actually making money with this site. If it were legit, it would be extremely easy to find real testimonials.

Here’s an example of a tweet that was faked: 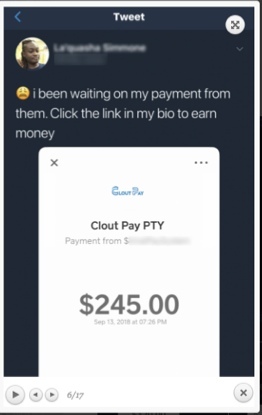 Both Viral Dollars and Clout Bucks use this same image as “proof”. However, when they used it on the Viral Dollars site, they didn’t blur out the name. So I searched for it, and it doesn’t exist in Twitter.

You can check that out here.

All of the visual Clout Pay payment “proofs” can be easily faked. These are not any sort of proof at all.

“What about those video testimonials?”, you might be wondering. Those are also faked. 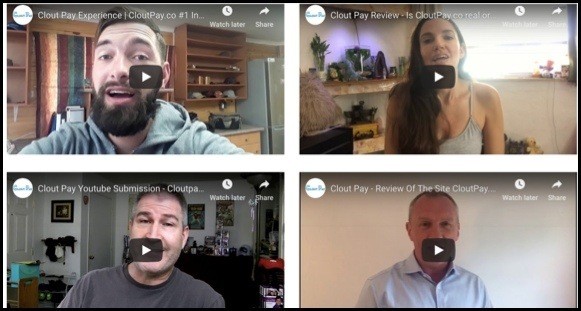 These people are actors, and I’ve seen some of them in many different product reviews. Here’s one of the actors from the freelancer site, Fiverr.com. 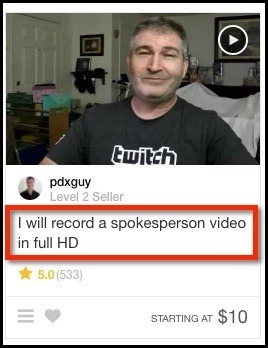 I hope this is enough proof for you that their “proof” is not real at all. In fact, on the testimonial page, they have an email address where you can contact them to send in your own testimonial. I contacted them, and here’s what I got:

Clout Pay Will Not Pay You

Some people using the other scam sites that I mentioned above have gotten through enough tasks, or have signed up enough people to qualify to get their money out. (I believe you need to earn $250 to qualify.)

But do you know what happens when they request their money?

They get a notice that their links are fake and therefore they won’t get paid for them. Here’s an image I used from the Clout Bucks review. This is from when the site was Kids Earn Cash.

They have a really interesting note in their Terms & Conditions that basically says they don’t have to pay you and they don’t have to give you a reason. You can read the terms here. Their Privacy Policy is the standard one you get with a new website, and it’s not even filled out.

Have I convinced  you yet?

If You’ve Already Signed Up…

The biggest thing you’ll want to do is change your password on any other site where you use the same password as Clout Bucks.

You will likely start getting tons of spam email. Hopefully your spam filter catches it and it won’t be much of a bother. Otherwise, you can just mark them as spam as they come in until they die down.

Be careful about any site that looks just like this one. They close one down, and open another. They all look the same, so you should be able to recognize it.

If you’ve referred any of your friends, send them to this review and let them know what’s going on and what to do.

I hope this Clout Pay review has given you enough information to make a good decision about signing up.

Listen, there are many ways to make money from home. None of the ones that say they are easy are really easy. (Because they don’t work.) I make an income working from home through affiliate marketing, and it’s my #1 recommended way to do it.

If you’re interested, you can read more about it with my free guide, How To: Affiliate Marketing for Beginners.

Do you have any questions or comments about this Clout Pay review? Leave me your thoughts  down below!