Is Valentus a pyramid scheme? To give you the short and sweet answer…no. But that’s only because the FTC hasn’t made that determination yet. In fact, Valentus is similar to another multi-level marketing (MLM) company that did get sued for being a pyramid scheme.

But that’s not their only problem.

Let me tell you all about this company so you can decide if this is an opportunity that you want to get yourself involved in.

Valentus is a MLM company that was founded in 2014 by Dave Jordan. According to the website:

“In Latin, the word “Valentus” means “prevail,” defined as proving to be superior in strength, power, and influence.”

They focus on “healthy” weight loss products, with their most popular product being their SlimROAST coffee.

There are a total of 12 products showcased on the Valentus website, and they are:

I usually like to tell you the prices of the products because I like to compare them with regular, non-MLM products. However, the prices are completely hidden.

Is that a red flag? Well, it kind of reveals that retail sales aren’t that important. And that’s a problem.

How Much Does it Cost to Join Valentus?

There are a few different starter pack options when you join Valentus. 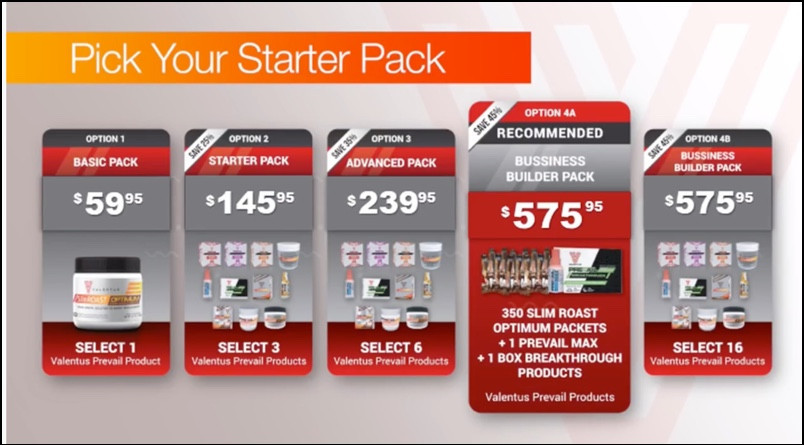 Here are the packs and their prices in case the image is hard for you to read:

You also need to have a minimum amount of monthly sales to qualify for ranks and commissions. This is either 50 BV (business volume) or 100 BV, depending on the rank and/or commission qualification. This can be from your personal orders or from retail sales.

But I know a lot of distributors will buy this themselves to stay qualified if they can’t make the retail sales.

Another tricky thing is that when you rank to Gold or above, you need to be on 100 BV autoship every month. That’s going to be a minimum of $100 – $150 every month.

According to the Valentus compensation plan, there are 7 ways to earn:

What’s interesting about this compensation plan is the fact that you can buy your rank based on which pack you start with.

There are thirteen ranks you can achieve in Valentus, and they are:

And that’s especially true when a monthly autoship is required, which it is for Valentus once you get past Silver rank.

Looking for a Valentus income disclosure? Me too! Since they’ve been up and running for a few years now, they should absolutely have an income disclosure available. However, some companies just don’t have them.

As far as I know, in order to make any income claims, an independent distributor is supposed to reference the income disclosure when doing so.

In any case, I’ve seen enough income disclosures by now to know exactly what the Valentus one would say. The majority of people make little to no money.

That’s what this report on the FTC’s website also tells us about MLMs.

This is a huge report, but here’s all you need to know:

That’s right. You’re better off playing the lottery than joining an MLM.

Valentus has a mixed bag of complaints and positive reviews. They are not accredited with the BBB and they get a B+ rating from them, which means they do a pretty good job of addressing customer complaints at the BBB website.

There is one positive reviewer here, and he’s not a distributor, so it’s nice to see a happy customer with nothing to gain from it:

Here’s someone who loves being a distributor and a customer: 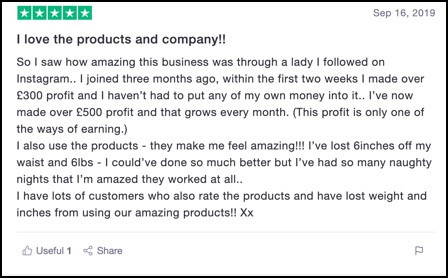 Of course, with every good, there’s a bad. Valentus certainly has its share of complaints. Most of the complaints I’ve seen have to do with customer service. Some are due to the fact that Valentus changed its formula at some point and now people are gaining weight instead of losing weight. (Which is such a similar story to Revital U.)

Some of the Valentus complaints said:

I think this Valentus complaint tops them all. This person would rather deal with migraines than deal with Valentus customer service: 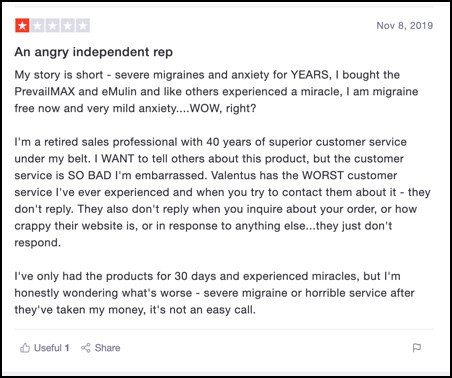 And here’s another great one from someone who was hoping to become a successful distributor: 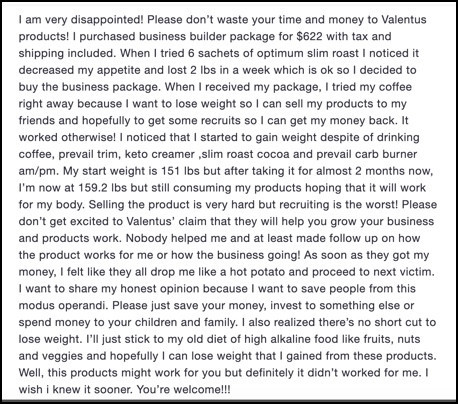 You can see these complaints and more at TrustPilot.

Here’s a news story about a woman in New Zealand who was getting a drug test for employment and ended up testing positive for amphetamines. Adamant she wasn’t a drug user, she ended up giving samples of the Valentus SlimROAST coffee to Compliance Partners who sent it off to a lab for testing and the testing showed that it contained two concerning ingredients: Phenethylamine (PEA), and 1,3-dimethylamylamine (DMAA).

In October 2019, Medsafe (looks to be New Zealand’s’ version of the FDA) warned consumers not use Valentus SlimROAST coffee and advised them to either return it or dispose of it.

There is even a Victims of Valentus Facebook group for New Zealanders who were harmed by Valentus in some way.

On another note, Valentus is illegal to sell in the UK.

Finally, there was a $3.1 million lawsuit between Valentus and its supplier because the supplier claimed that Valentus broke their contract. So this one doesn’t have anything to do with customers, but it’s still interesting to note.

Be Careful with Valentus Distributor Tricks

This is a problem that is prevalent in the MLM world, and not just with Valentus. While browsing Instagram, I found this post about Valentus: 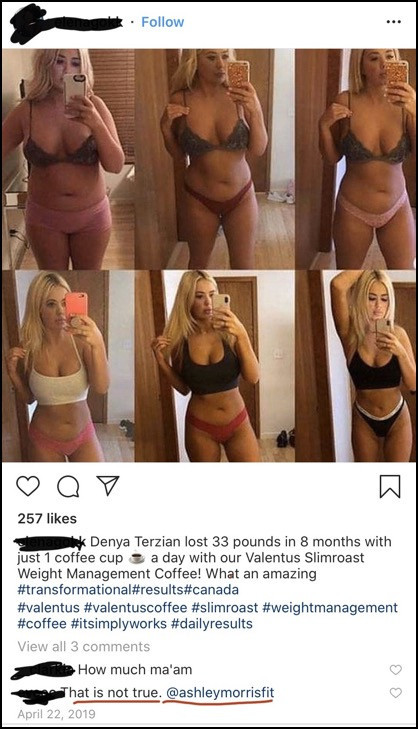 The distributor tries to say that this person (Denya Terzian) successfully lost weight due to Valentus. As a commenter points out, the photos are from the Instagram account of someone named Ashley Morris who doesn’t have anything to do with Valentus. If you look at her Instagram, it looks like she works out and eats well and that’s how she lost weight. (What a concept, right?)

When you take a look at those before and after pictures you see online, just remember that they may not be exactly what they seem.

Is Valentus a Scam or a Pyramid Scheme?

The reason why it seems Valentus is going down pyramid scheme territory is due to their push on recruiting and due to the fact that you are required to have autoship in order to qualify for certain ranks.

It’s going to be really hard to convince people to buy coffee for $64.95. Especially once they read reviews about the dangerous ingredients, poor customer service and weight gain the new formula causes some people.

I really like Behind MLM’s conclusion on Valentus, and this part especially tells the whole tale of this company:

“At the end of the day, an MLM opportunity needs to reward affiliates based on sales performance, with a healthy amount of that being retail sales.

Valentus instead demands affiliates sign up for autoship and recruit others who do the same, with retail able to be ignored completely.”

That’s pretty much how a pyramid scheme works…

While Valentus may not be technically considered a pyramid scheme at this time, there are definitely some red flags to consider before signing up. Besides the fact that almost no one makes money in any MLM, Valentus is especially troublesome due to the high costs of the products, the illegal ingredients, the health warnings in New Zealand and customer service issues.

All of that’s on top of the fact that you have to be on autoship every month in order to qualify for most rankings in the company and there is a heavy focus on recruiting versus retail sales.

I love coffee as much as the next person, but I think I’ll pass on this one.