Is Revital U MLM? Yes, Revital U is a multi-level marketing (MLM) company because you get paid not only on your own sales, but on the sales of others that you recruit into the business and on those they recruit, etc. In other words, you get paid on multiple levels.

Now that we got that question out of the way, there’s much more to discuss with Revital U. For instance, is it a good business opportunity? Since it’s an MLM, does that also mean it’s a pyramid scheme? Is it a complete scam, or a legit way to earn an income?

What is Revital U?

There isn’t any information about when, how or why Revital U got started on its website, but from doing some simple research, it appears this MLM started in 2016 and Andrew McWilliams is the CEO of the company.

An interesting side fact is that McWilliams was also the CEO of the now-defunct Momentis, which was the MLM arm of a gas and energy company. He was previously an affiliate for ACN, another network marketing company, and LuxuriLife, a high-ticket recruitment scheme.

Revital U’s main product is coffee. Expensive coffee. But this coffee is supposed to help you lose weight. They also have cocoa, and capsules if coffee’s not your thing.

Here’s an idea of how much their products cost:

Dang, and I thought Starbucks was expensive!

Of course, this coffee is magical because it’s supposed to help you lose weight. We’ll get back to that a little later.

There is one thing Revital U does that I give them credit for. You can order samples for free (you just pay shipping) to try it before you buy it.

How Much Does it Cost to Join Revital U?

In order to become an affiliate for Revital U, you will need to pay a $49.99 membership fee. I wasn’t able to find out if this gets you a starter kit, or if that’s just a fee that you pay without getting products.

Here’s someone who talks about the Starter Kit, but again, I’m not sure if buying a starter kit is extra.

(P.S. I noticed that April doesn’t have any more Revital U videos on her page, but she does have some for another MLM, Chalk Couture. She doesn’t appear to have lost weight since the Revital U video, so I’m guessing it didn’t end up working out for her?)

The Revital U compensation plan is 25 pages long, and if you are extremely bored or a glutton for punishment, you can read the entire thing here. If BehindMLM breaks it down on their website, I like to point people there because they do a good job of explaining the ins and outs. You can read that here.

What BehindMLM mentions is that the compensation plan has a heavy focus on retail, which makes it much more legitimate than other MLMs such as Kyani or LifeVantage. That’s the good news.

Unfortunately, there seems to be a downside when there’s a heavy retail focus. And that’s that it’s harder to make good money. We’ll talk about that a little later.

Unfortunately, I couldn’t find an income disclosure for Revital U. Someone on Reddit found a snippet where they say that the average Revital U distributor makes approximately $312 per year. I don’t know how legitimate or accurate that is because I don’t know where that source of information came from.

However, I tend to believe that’s true because that’s basically what every income disclosure I’ve looked at so far says. In fact, I always like to point to this page in a report done that’s posted on the FTC’s website. This is an extremely long report on MLMs and how terrible they are, but all you need to read is this paragraph:

Revital U Complaints and Positive Reviews

This is the part where I really like to focus on because it matters what people think of a company, its products, and its business opportunity. Revital U seems to have a pretty bad reputation when it comes to online reviews. Let’s take a look at what people are saying.

Revital U at the BBB

First, Revital U is not accredited with the BBB and they get a B- rating. The reviews look terrible, but keep in mind there’s only 1:

Here’s a particularly interesting complaint about the business side of things. This exchange goes on with the company and you can see the back-and-forth here. 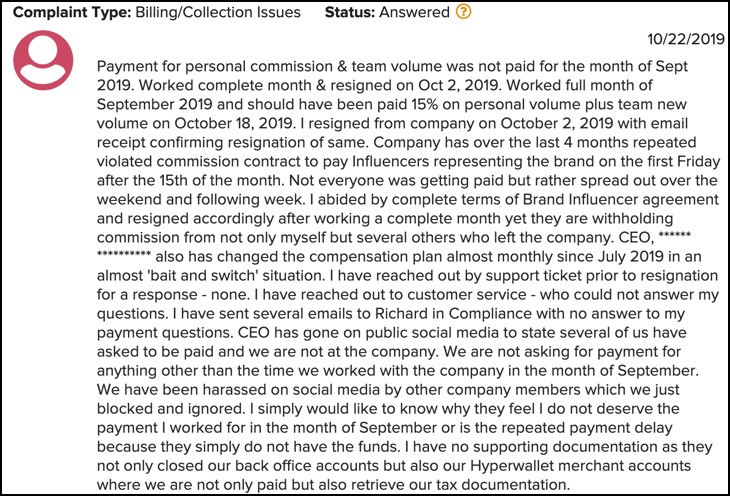 If you’re working for an MLM and you’re not getting paid for that work, that’s a problem. We already talked about how almost no one makes money in an MLM. To make money and then to not get it is unacceptable.

In looking at other sources, Revital U gets does not get a lot of positive reviews. (We’ll get back to that in a minute.) I have seen some that say they have had success with weight loss with this product.

Here’s one particular person from Reddit who has had success…but with a bit of a downside:

It seems that quite a few people have had success with weight loss and the coffee has decreased their appetite, but it always seems to come with a cost.

One person said they got heart palpitations. A few others said they couldn’t sleep, were jittery and their heart rates increased. Some people said it was like being on speed. Someone said it made them feel like they were drunk, but productive.

Revital U on TrustPilot

Revital U gets a pretty terrible rating on TrustPilot. In fact, their rating is “Poor”.

A couple of the positive reviews said they love Revital U. It seems as if they recently changed their formula and a couple of people mentioned they really like it.

Most of the reviewers say they absolutely hate the new formula and they are gaining weight instead of losing weight. 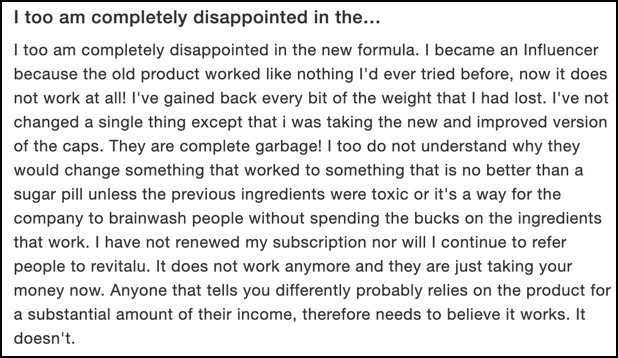 Here’s another complaint about the new formula: 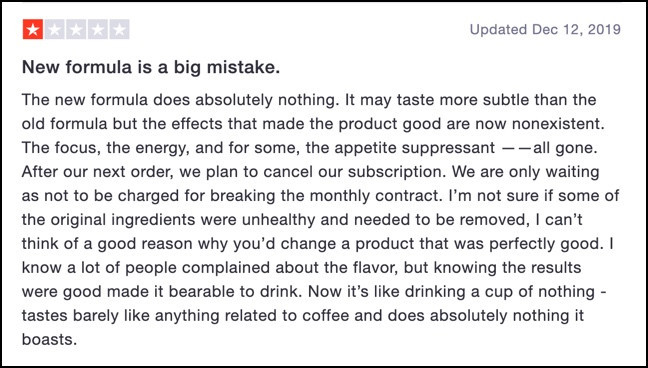 There were also quite a few complaints here about customer service issues. Either their order took forever to ship or they couldn’t get a hold of anyone in customer service to get a refund. Someone said it’s “not worth the hassle” to order from Revital U.

You can read all the reviews from Trustpilot here.

Is Revital U a Scam or a Pyramid Scheme?

Revital U is not a scam nor is it a pyramid scheme. In fact, because they have a heavy focus on retail sales, it actually makes them less pyramid scheme-y than most other MLMs. Unfortunately, they have a lot of other issues and making money with Revital U, in my opinion, will probably be nearly impossible.

Is Revital U Safe?

As mentioned above, people who have tried Revital U said it did work for weight loss – but at a price. There were issues sleeplessness, irritability, heart palpitations, and jitteryness.

One of the major issues that people had with Revital U is one key ingredient – Octopamine. According to Revital U’s documentation (here),

“When you increase the body’s metabolism, it results in helping the body burn calories and in the loss of body weight. Octopamine, which is found naturally in various foods, provides support and activity in fat metabolism.*

It also may also stimulate Beta-3 Adrenergic Receptor, which is responsible for lipolysis (fat breakdown), and thermogenesis (fat burning).*”

However, it seems that Octopamine is a close relative of the banned substance, DMAA. Here’s a snippet on WebMD about Octopamine. Some people have called it “baby meth”.

The good news is that Revital U recently took it out of their formula. The bad news is that the formula doesn’t seem to work anymore.

In any case, none of this even matters in my mind. Taking any substance for weight loss is unnatural and your body is likely going to revolt eventually. You’ll either end up with a host of side effects as mentioned above, or you’ll end up regaining the weight that you lost (and possibly more) after you stop taking the coffee.

I know us humans tend to be lazy (I sure am), but good old-fashioned advice like eat less and move more seems to be the only weight loss trick that ever works long-term. Check out My Fitness Pal. It’s free and it works.

It’s no secret that MLMs are not my favorite way to earn an income and the reason is what I mentioned at least a couple of times in this article – most people lose money in MLMs! Not only that, but people are really wising up to these companies and their bad practices, and there’s a whole anti-MLM movement going where more and more people aren’t willing to even touch a product from an MLM company.

While Revital U isn’t considered a scam, people are still going to be skeptical, especially when they do their research and find all the negative reviews. Then they’ll really be turned off once they see the product doesn’t even work. (Even when it did work, it worked with side effects and seemed pretty unsafe.)

Of course, what you do with this information is up to you. If you like the idea of earning an income on your own schedule and being your own boss, then I would consider affiliate marketing instead. There’s no recruiting, training, buying inventory, buying a starter kit or any other nonsense like that. You can learn more about affiliate marketing with my free guide.