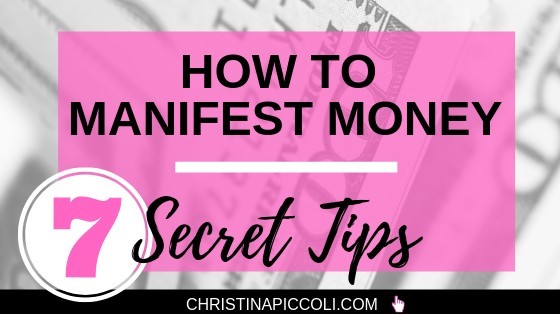 How to Manifest Money Tip #1 – Visualize. (Be Crystal Clear.)

OK fine, visualizing isn’t exactly a secret. If you’ve been around Law of Attraction circles at all, then you probably know what visualizing is. The thing is, a lot of people don’t do it quite right. They sit in a quiet place and think about what they want.

Do you ever have trouble knowing exactly what you want? You may kind of have an idea, but you’re not crystal clear about it. The real secret here is to figure out exactly what you want in your life. This is harder than it seems. Sometimes you think you want something, but do you really want it?

I see people all the time playing the lottery. They’re on TV saying “Oh, I hope I win! I hope I win!” But do they really want to win? My guess is no. Why? They probably have some deep inner thoughts about how winning will be a real pain in the arse! Maybe they’ve even heard stories about people who’ve won and then their lives were threatened.

These are things that stick deep inside your subconscious. These are your paradigms that hold you hostage. More about these later.

How to Manifest Money Tip #2 – Write It Down.

I’ve had some success manifesting money (and other things) by writing it down. I don’t know what it is about writing something down. It’s almost magical.

One time I wrote down that I wanted to win over $5000. I just wanted to experience what it would be like. I ended up winning $12,000 not too long after that.

Another time I wrote down that I wanted to go on a tropical vacation with my family. I ended up winning a trip for 4 to the Bahamas. (I wrote about that a little bit in this post.)

A couple of years ago, I wrote down exactly what I wanted my day to look like. I wrote that I wanted to work from home on my own schedule, be around for my kids when they need me, be able to exercise whenever I felt like it, and work in my slippers if I want to. And that’s exactly how I live my life now. (Thanks to the Law of Attraction and affiliate marketing!)

Here’s a book I highly recommend: Write It Down, Make It Happen. (If you don’t already have an Audible account, you should be able to sign up for a free account, and you can download this book for free!)

How to Manifest Money Tip #3 – Believe It Can Happen. (Or, Want It So Much It Doesn’t Matter What You Believe.)

This is probably the hardest tip of them all. Having belief isn’t probably too much of a secret either. I’m sure you know you need to believe. But there is a secret component (or 2) we’ll get to in a second. In order to bring anything into your life, you have to believe it can happen.

The secret component here is something I talked about in tip #1. You have to change your paradigms. We’ll talk more about it soon.

The other secret is one I learned from The Law of Attraction book. (I HIGHLY recommend the audio of this one.) You can want something so much that it doesn’t matter if you believe you’ll get it or not. I have two instances in my life where this happened.

The first is when I won that $12,000 that I mentioned above. Part of that, as I mentioned, was wanting to experience what it was like to win over $5,000. But the real reason I won that money is because I wanted – obsessed over – having a Macbook Air. I don’t even know why, to be honest. It’s just something that came over me. You can read about that story on my other site.

The other time it happened was when I was about 7. My Stepmom announced she was pregnant and I was obsessed with her having twin girls. I wanted twin sisters badly. She laughed and laughed. She thought it was hilarious! Until she found out in her 7th month that she was having twin girls. 🙂

You can have anything you want.

A lot of Law of Attraction books and teachers say that you need to visualize and be crystal clear about what you want. And then let it go.

And it’s like “Huh? I thought I had to think about this all the time to make it feel real?”

OK, I’ve personally had a couple of different experiences with this one. In the case with my computer and my sisters, those are things I thought about over and over again. I couldn’t get them out of my mind even if I tried.

I’ve also had experiences where I’ve asked for something, didn’t think about it again, and it showed up or happened quickly (but my “vibes” were really high and that’s another story for another day).

In both cases though, there is something that’s similar. I didn’t care how it happened. That’s the letting go part.

You want to manifest money. You visualize the amount that you want. See it over and over again. But don’t worry about the how. Let go of HOW it’ll happen. Let the Universe take care of that.

In the book Your Invisible Power, (the Audible book is less than $5. Seriously? This is the best $5 you’ll ever spend.) Genevieve talks about how she wanted to go overseas to speak with Thomas Troward. She didn’t have the money to get there. So every night she visualized over and over counting the money. She did it every single night until one night she said it just felt different. She KNEW how she would get the money.

In this case, she kept visualizing to put the picture into her subconscious and then the Universe showed her a way to get the money. She didn’t worry about the how. She let that part go, and the Universe delivered that to her.

How to Manifest Money Tip #5 – It’s Not Always About the Money.

Why do you want money? What will that money do? Sometimes when we want money, it’s because we want to buy something specific with it. Sometimes it’s better to focus on the specific thing instead of the money.

In the case with my computer, I really wanted that damn computer! (The one I’m typing on now, by the way.) The money came.

Sometimes we want money to buy a car or a house or a purse. You can visualize those things instead. Imagine yourself walking around with your brand new purse. Visualize that over and over again.

Do you have bills to pay? Instead of visualizing having the money, you can try to visualize paying your bills and how good that feels.

The money will come.

How to Manifest Money Tip #6 – Don’t Need the Money

If you need money, that’s what the Universe delivers to you. This one is going to be really tricky. It’s a little bit tough to change your thought pattern here, but you can do it.

It’s not really the Universe’s fault. It’s just the Law of Attraction. You attract what you think about. This is why Tip #5 is sometimes a good way around this. Visualize the thing you want to do with the money instead of needing the money to get the thing that you want.

How to Manifest Money Tip #7 – Change your Paradigms

Paradigms are some bitches! I mean, these suckers are just drilled into your brain starting from the day you were born. Paradigms are those beliefs that are wedged deeeeeeepppp in your subconscious. Paradigms control your beliefs about money.

Do you ever hear yourself say something like “I can’t afford that.” Or, “I have to work this soul-sucking job to pay the bills.” Yea, those are paradigms.

I’m not going to go too deep into this, but I wrote a blog post called How to Paradigm Shift that talks about it more.

The one person that I talk about in that post that goes into this deeply and has helped me tremendously is Bob Proctor. Here’s a video of his about changing your paradigms.

Bob Proctor started off poor and he was able to shift his paradigms and learn how to manifest money. He manifests millions now. And he teaches us how to do it, too.

I was lucky enough to live stream Paradigm Shift last year. If you can swing it, I highly recommend you do. It’s incredible.

Bob also has some other great programs. I recommend everything Bob Proctor does. He gets things into your head like no one else does. Do you really want to learn how to manifest money? Learn from the master.

I really recommend Paradigm Shift, but it’s only around a couple of times a year. If you miss it, there are other programs and videos where you can learn from Bob (and his partner Sandy Gallagher). Here are two great ones:

It’s Not About Wishing Money Into Existence

People get the wrong idea about the Law of Attraction and manifesting money. It’s not that you just want money and you wish it into existence. Instead, you visualize the money (or thing) that you want and then you get inspired to take action to get that money (or thing). 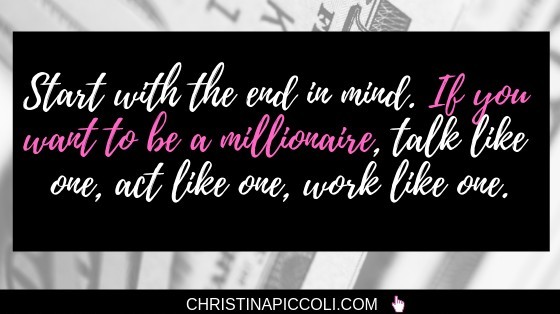 Let’s say you wish you be a millionaire. You visualize it over and over again. You then might be inspired to make a YouTube video that goes viral. Or you might be inspired to play the lottery. Or perhaps you land on this site and you read my free guide, 4 Steps to Affiliate Success (shameless plug) and you’re inspired to create a blog that ends up making you millions.

There are countless ways for you to manifest money. You have to listen to your inner guidance and then ACT.

You don’t just sit around on the couch and wait for money to fall into your lap. You get inspired. Then you act.

We’re here as physical beings on this earth to be physical and to create. Create something amazing. And then let the money come.

(Sitting on the couch is boring anyway!)

What do you think? Do you understand how to manifest money now? Have you ever had a time when you manifested money deliberately? Feel free to share your story below in the comments section. 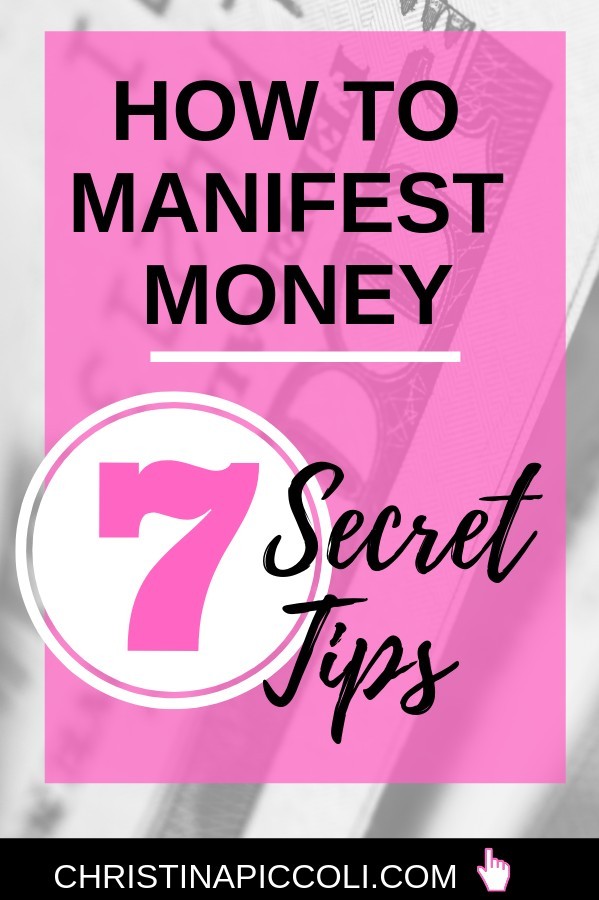