Is Melaleuca legitimate? Have you seen their products and are having thoughts about joining the business opportunity? Do you want to know if it’s worth it and if you can actually make money from this?

Well, first let me give you a little disclaimer. This article is based on my opinion only. I’m not the FTC so I can’t actually determine whether Melaleuca is legitimate or not. I can just give you my thoughts.

I don’t sell Melaleuca, and I’m not a customer. (But I was at one time.)

Melaleuca has been around for a long time, but I’ll tell you right now that there are some things I don’t like about it.

In no particular order:

I’m obviously not going to recommend the business opportunity to you, but now let me tell you exactly why.

Melaleuca calls themselves “The Wellness Company” and is a multi-level marketing (MLM) company founded way back in 1985. They are based out of Idaho Falls, Idaho. Frank VanderSloot (which admittedly is a very fun name to say) took over as CEO in 1985 after his relatives’ business, Oil of Melaleuca, got in trouble with the FDA. VanderSloot shut down that business and rebranded it as Melaleuca.

Fun fact about VanderSloot according to this Wikipedia article, “In 2017, Forbes listed VanderSloot as the richest person in Idaho and the 302nd wealthiest American with a net worth of $2.7 billion.”

Melaleuca has all kinds of products on its website, including nutritional supplements, dry skin therapy, acne treatments, gums and mints, coffee and tea, household cleaners, essential oils, and makeup.

Finding prices on the Melaleuca website is not really easy (or possible), which is weird since they say that their prices are less than big box stores. Are we just supposed to believe that and sign up no matter what?

As a customer, this would frustrate me. But since the company made $2.1 billion in revenue in 2018, someone must be buying the products…

How Much Does it Cost to Join Melaleuca?

There is a $29 annual membership fee to join Melaleuca as an affiliate, or $19 if you sign up as a preferred customer.

To qualify for commissions, you need to have an order of at least 29 points of product each month. This can be what you personally buy, or what you sign up someone to buy.

Anyone who signs up to Melaleuca is a “customer” whether or not you want to build a business.

Thankfully, the Melaleuca Compensation Plan is “only” 12 pages long. You can enjoy reading that here. I prefer looking at BehindMLM’s breakdowns because they do a better job than I ever could. So, if you really want to know the ins and outs of the plan, you can read that here.

I tried to find a video of someone explaining the compensation plan as most MLMs do, but it seems like no one was really willing to tackle it.

I did learn that there are an eye-popping 49 ranks within Melaleuca. If you’re really interested to know what they all are and how to qualify, then see either the BehindMLM or official compensation plan link. Both are posted above.

I’m not going to list them all here because:

You probably would do like I did and scroll through all the ranks quickly because let’s face it, unless you’re in the top 2 or 3 ranks, that shit is boring!

Melaleuca does have an income disclosure posted. You can see the one for 2018 here.

First, I’ll give you the quick and dirty version.

ALMOST NO ONE CAN MAKE MONEY WITH MELALEUCA!

Did you hear that?

Just like every other MLM I’ve looked at, almost no one makes decent money in this one. Their excuse is that almost everyone who shops with Melaleuca is a customer and not a business builder. 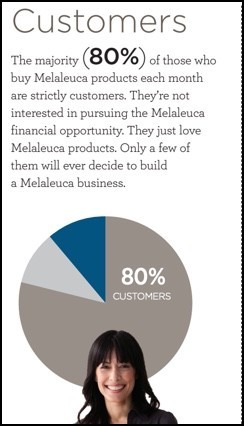 But we know that everyone who signs up with Melaleuca is considered a customer. So, how many of those “customers” wanted to build a business but didn’t make money doing it? There isn’t a distinction.

In order to start making a decent income (an average of $33k a year – before expenses) you need to become at least a Director 8/9:

You can see that only 0.6% of affiliates make it to this level.

And do you see that row that says “Personal Customers”? That means you would have to personally enroll about 61 people in order to get to this level.

Are you going to find 61 people willing to shop with Melaleuca instead of going to Target?

When I went to look at Melaleuca reviews, I really thought there would be way more positive reviews than complaints. But, that’s not exactly the case.

They seem to have a good record with the BBB:

What’s really weird is that they have 0 complaints with the BBB.

And the company was started in 1985? This just isn’t possible. So that’s already shady.

Especially when I go to other sites and I see plenty of people complaining. You can see complaints (and positive reviews) at TrustPilot.

Here’s the type of positive review you have to be wary about:

Is this true? Who knows? But it can’t be proven. People who make these kinds of claims who are selling the product can get the company into a lot of trouble.

TruthinAdvertising.org is on top of these kinds of claims. (They’re also on top of unsubstantiated income claims.)

Here’s an interesting complaint from a customer:

This is how Melaleuca makes its $2.1 billion in sales.

Is Melaleuca a Scam or a Pyramid Scheme?

Is Melaleuca a scam? Is it a pyramid scheme? In my opinion, it’s not a scam because you should be signing up for something that you were told about. I think “forcing customers to buy a certain amount every month” is an issue, but as long as you know that’s what you’re signing up for, that’s OK.

Is Melaleuca a pyramid scheme? Again, I’m not the FTC, so I can’t really make that determination officially. My opinion about this changed before I wrote this article versus now when I’m at the end. I’ll tell you what I think in a minute.

Is Melaleuca a Pyramid Scheme Then?

Before I even started this article I thought I was going to say that Melaleuca was definitely not a pyramid scheme because they have such a heavy focus on retail sales.

That’s true, but I changed my mind and think they are pyramid schemey-ish because it seems to me that most of their retail sales are coming from their affiliates (which they conveniently call customers). This is the structure that makes MLMs so terrible. Very few people outside of the MLM are buying. Therefore, when you sign up, YOU become the customer.

A legitimate MLM has most of its sales coming from retail customers. If I’m looking at things correctly, this just doesn’t seem to be the case.

My Experience with Melaleuca

I went to a Melaleuca home party once and I bought some of the products. They were good, and I had no issues with them. I went with some of their home cleaning products.

I remember that I had to sign up to receive a monthly order and it was done on the points system. I never completely understood it, but it didn’t matter because I canceled the recurring order right away. (By the way, I ordered to help a friend out. You know how that goes…)

Why did I cancel immediately?

Because the whole time I was at this party, I kept thinking to myself, “why wouldn’t I just go to Target to get what I need? Or order on Amazon?”

If you need toothpaste, you probably need it now, not whenever your next order comes in.

I couldn’t wrap my head around ordering things monthly when I could get them when I needed them at the store near me.

They don’t even show prices on the website. Why would anyone choose to order through Melaleuca and just trust the prices when they can just hit their local grocery store or Target?

There’s only one answer as to why someone would do that.

Like just about every MLM, Melaleuca’s customers are its distributors.

Distributors are spending their own hard-earned money on these products “that they need anyway” and Frank VanderSloot is laughing his ass off all the way to the bank.

Is Melaleuca legitimate? I mean, it is a legitimate business for Frank VanderSloot, billionaire owner of the company. The products are decent, but I don’t think they’re as well priced as we’re told by enthusiasts. (And we won’t know for sure until we order because there aren’t any prices on the website.)

In any case, if you’re looking to earn an income with Melaleuca, you’d best look elsewhere. Like all MLMs, you would be very, very lucky in order to make a somewhat decent living with them. Only a small percent even make a $30k a year wage on average.

But if you’d like to give Frank VanderSloot even more money, then who am I top stop you?

(And yea, I just wanted to type VanderSloot one more time.)