There seems to be a multi-level marketing company for everything out there. Yes, that even includes chocolate. Have you heard of The Cocoa Exchange? (It was formerly known as Dove Chocolate Discoveries.)

Have you been presented with the opportunity to become a Curator? Maybe you want to know if The Cocoa Exchange is a pyramid scheme or a scam before you decide to join up?

Well, there’s good news and bad news about that.

But let’s go through everything so you can see what The Cocoa Exchange is all about.

What is The Cocoa Exchange?

The Cocoa Exchange is a division of Mars Wrigley Confectionary, which includes well-known chocolate brands such as M&M’s, Snickers and DOVE. According to their About page, “Mars realized that some new products are so innovative and on-trend that they need to be demonstrated and experienced rather than just sit on store shelves.”

The Cocoa Exchange was formed in 2017. (As mentioned above, they were known as Dove Chocolate Discoveries for a decade prior.)

Here’s a short video from The Cocoa Exchange about their opportunity:

Here are the categories of products included on the website:

While I didn’t look through every product, it seems prices range from about $12 to about $110. Let’s take a look at a few different products and their prices.

It looks like you can order directly from the site and you don’t need a Curator, which is what they call their independent distributors.

How Much Does it Cost to Join The Cocoa Exchange?

In order to become a Curator, you will need to order a Starter Kit. The kit is $129 plus tax, and they offer free shipping. I couldn’t find information on their site about what comes in the Starter Kit, but here’s a video of an unboxing to give you an idea:

It looks like you get a variety of the Dove Signature brand and the Pod & Bean brand. This probably varies based on what they have available at the time so this may not be a true reflection of what you would get.

According to their website, in order to remain active, you need to have $600 in Personal Sales Volume in a rolling 6-month period. These can be from sales that you make or your own personal sales.

They also mention a website subscription, but they don’t mention if it’s a separate fee, or if it’s a part of the cost of the Starter Kit.

There’s also a heavy focus on home parties, and there would be additional optional costs for these too such as food, drinks product samples, brochures, business cards and gas for traveling.

I didn’t find a way to get to The Cocoa Exchange compensation plan directly from their website. But here’s a video from a team leader that goes over it.

She says at the beginning of the video that the secret sauce to The Cocoa Exchange is to become a team leader and build team leaders under you. This will cause your paycheck to grow.

We’ll come back to this a little later.

From what I can see in the video, there are 9 levels:

Here are the levels, plus what you need to qualify for each one:

Here’s a screenshot from the video posted above to give you a visual of all of this:

I encourage you to watch the video if you really want to know more about the compensation plan.

Here’s one such post that Truth in Advertising caught. You can see the full page here. 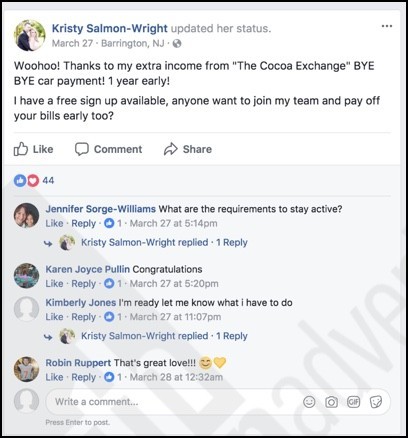 By the way, see all the comments she’s gotten here? I can almost guarantee that these are other Cocoa Exchange members who are trying to help her get her page more views on Facebook. These aren’t actually interested people.

This is a common tactic that MLMs use and one that I used in Young Living. Be very wary of what you see online. Most of it isn’t real.

The Cocoa Exchange is pretty new and not the most popular MLM, so there aren’t a lot of positive reviews or complaints out there. I did find some on their Facebook page.

It looks like all the positive reviews are from Curators. They all say the company and the products are “ahhhhmaaazzziinnngg.”

Some complaints that I found say:

Now, to give The Cocoa Exchange credit, I highly doubt they would ever condone this type of behavior. We can’t blame them for people doing things like this. But this kind of thing happens in MLMs because distributors become desperate for sales.

Here’s another interesting complaint from someone on the Glassdoor website: 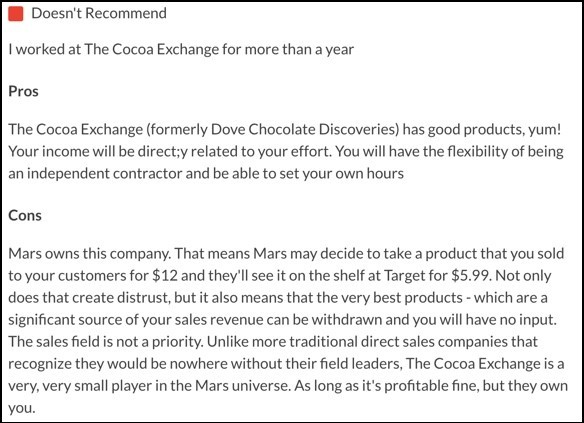 I think it’s already hard to sell MLM products because they are overpriced. But then to have the same products sold at Target…that makes it even worse!

Is The Cocoa Exchange a Scam or a Pyramid Scheme?

In my opinion, The Cocoa Exchange isn’t a scam and due to its focus on home parties and retail sales, I would also say it’s not a pyramid scheme.

What makes it tricky though is that you likely aren’t going to make a great living just by doing home parties and making retail sales. As the woman in the video said above, if you want your paycheck to explode, you need to be a Team Leader, recruit and create other Team Leaders on your team.

The thing is, once the focus is on recruiting versus retail sales, that’s where you start getting into pyramid scheme territory. I’ll show you what I mean in a minute.

As I mentioned, if almost all the money you make in an MLM is from recruiting, you’re going right into pyramid scheme territory. Here’s a snippet from an article posted on the FTC’s website that sums it up nicely:

“So what’s the bottom line for you? If you’re planning to buy into a multilevel marketing plan, get the details:

In my opinion, and from the research I’ve done, almost all MLMs require building a downline in order to make a significant income. However, only a tiny amount of people ever get to the top. The vast majority of people – over 99% – lose money trying to get there. Source.

While The Cocoa Exchange may not technically be a pyramid scheme, it can have pyramid scheme tendencies if recruiting becomes more important than selling products to retail customers.

The issue with MLMs is that it’s hard to sell products retail because the products are all overpriced (and that’s certainly true with The Cocoa Exchange too). Therefore, in order to make a good income, you need to recruit a team.

The problem is that MLMs take a ton of work and time and investment to make them work, and that’s why over 99% of people lose money instead of make money. In my opinion, there are much, much better ways to earn an income that don’t require recruiting, training or overpriced products.