Have you seen the Facebook lives? The ones where the rings are in bath bombs and they’re dissolved to reveal someone’s ring that they ordered? This company is called Ring Bomb Party.

You may be wondering, is Ring Bomb Party a multi-level marketing (MLM) company? Is it legitimate? Can you make money doing this? How much does it cost to be a Ring Bomb Party consultant?

I’m going to help you answer all of those questions and more below.

Let’s dive into Ring Bomb Party and see what this is all about.

What is Ring Bomb Party?

There’s not a lot of information on Ring Bomb Party on their website. It doesn’t reveal who established the company, who’s running the show now or when it got started.

After doing a little digging, I found that the company was started by a woman named Lillian Coleman. She and her sister, run the company with the help of a few friends.

I know from the Better Business Bureau website (we’ll get back to them a little later for some reviews) that the company has been in business 3 years at of the time of this writing, and they’ve been accredited with the BBB since 4/25/2018.

I saw a post from the CEO on a BBB comment and she said she started the company in 2016.

Ring Bomb Party is a multi-level marketing (MLM) company that sells jewelry in a unique way.

How Does Ring Bomb Party Work?

From what I understand, you get in contact with a Ring Bomb Party consultant and you order the ring size that you want. The cost is $17.95 per ring. That consultant then places an order for all the sizes she needs.

The rings are placed inside of something like a bath bomb, except there are no essential oils and they aren’t actually meant for the bath.

The consultant does a Facebook live and puts each ring bomb into water to dissolve the bomb and it reveals the ring. The person who ordered the ring will get to see it during the live. The rings have an estimated retail value of $25 – $500.

Here’s a Facebook live posted by Ring Bomb Party, if you want to see what it’s like. Here’s a screenshot I took of one of the rings that was revealed that has a suggested retail price of $64. Yes, I’m serious. She said $64. 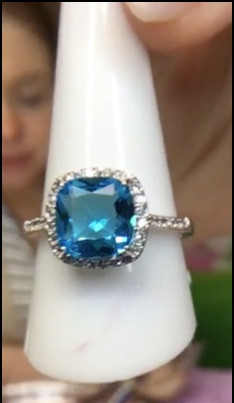 Apparently, they suggest such high values because each piece is custom-made. They wouldn’t be appraised by a jeweler at these prices.

Let’s move on to see if this is a business opportunity worth joining.

How Much Does it Cost to Become a Ring Bomb Party Consultant?

According to the Ring Bomb Party website, you have to buy a Starter Kit for $49 and an inventory purchase of $350. In order to remain an active distributor, you need to have 350 PV (personal volume) monthly. This comes out to $350 per month.

I haven’t seen how much this is, but generally, this is a monthly cost of somewhere between $10 – $20.

Here is the Ring Bomb Party compensation plan from the website.

I honestly don’t understand compensation plans (they make very little sense), so I’ll post a video that can hopefully explain it better than I could. I don’t care to go through them in detail anyway because I’m never going to recommend that you join an MLM. It’s just too hard to make money with them.)

But let’s just get some basic details on this one:

There are two ways to make money with Ring Bomb Party:

2. MLM Commissions. Once you become a Citrine Senior Hostesses, you’ll get a 5% Team Commission Bonus. Each level after that has its own bonus structure. There are requirements for each level.

The requirement for Citrine Senior Hostess is 525 PV and you need to have 2 personally sponsored qualified Party Hostesses under you.

The requirements go up from there.

I encourage you to watch the video if you want all the details.

There isn’t a Ring Bomb Party income disclosure that I could find. It’s not that surprising since this company doesn’t reveal much about themselves. They seem a little secretive.

During the Facebook live I posted above, the consultant said they design all their rings in-house, but they “don’t reveal their manufacturer.”

I’ve seen enough income disclosures, and they all reveal the same thing…it’s hard to make money in an MLM. In fact, over 99% of people end up losing money in them.

I would be particularly interested to see what Ring Bomb Party’s income disclosure looked like due to the fact that the monthly PV requirement is so high.

They do prohibit distributors from buying inventory to increase their PV:

This is good because it does discourage distributors from overspending.

There are always ways around this.

As I mentioned above, Ring Bomb Party is accredited with the BBB, and they have an A- rating, so they are good at getting back to customers when they have an issue.

Their customer reviews are pretty good, but please understand that it’s likely that a good portion of these are consultants that have come to the BBB to leave most of the positive reviews.

Now let’s move on to the Ring Bomb Party complaints.

As you can see, most of the complaints are about the quality of the jewelry. That’s why I was kind of surprised that they gave the ring I posted above a suggested retail value of $64.

I’m no jewelry expert, but it looks cheap.

Again, they give them higher value because they are custom-made pieces, not because they’re actually worth that much.

Is Ring Bomb Party a Scam or a Pyramid Scheme?

Ring Bomb Party isn’t a scam and it’s not technically a pyramid scheme. I do think there is more focus on retail sales here as compared to other MLMs who have a bigger focus on recruiting.

The thing is, can you really make a good income by just doing ring bomb parties? How many rings would you have to sell to make a decent income?

That’s for one month.

If you sell them all.

Maybe you can. Maybe you’re a master seller. Maybe you can sell double that. You would still only make 179.50 in a month. That’s not a lot. And that’s why you make more money with recruiting.

Which turns it into a borderline pyramid scheme.

I think this comment made on the BBB makes a really great point:

This is a similar conclusion that Alanda Carter, The Recovering Hunbot, makes in her YouTube video about this company. She calls is Love Bombing, where a person is trying to fill a hole inside themselves by attending these parties and loading up on rings.

You can check out her video here:

An Alternative to Ring Bomb Party

Obviously, you’re free to do whatever you want. I just want to help you make a good decision for yourself. If you want to sign up for Ring Bomb Party, I don’t recommend it, but who am I to stop you?

However, if you want an alternative, then I have suggestions for you.

First of all, the Ring Bomb Parties do seem like fun. I think it would be a fun thing for my 12-year old daughter to do with some friends.

Amazon has a variety of these bombs with jewelry inside of them. For less. And they also have actual bath bombs that you can use in the bath.

If you like the idea of being a consultant and earning an income in your spare time, then let me remind you that most people who are in an MLM lose money.

As an alternative, I love to suggest blogging/affiliate marketing. Affiliate marketing is promoting other people’s products for a commission. But without recruiting, training, hosting Facebook parties or buying $350 worth of inventory every month.

In fact, the link that I posted above to Amazon is an affiliate link. If someone clicks on that link and buys something from Amazon, I’ll earn a commission.

Let me tell you more about affiliate marketing with my free guide for beginners here.

Is Ring Bomb Party MLM? Yes, it absolutely is. If a company has a compensation plan, then you can bet that it’s going to be an MLM.

Will you make money with Ring Bomb Party? I think it’s going to be very, very hard. Just about everyone ends up losing money in an MLM (unless you’re the CEO), no matter the MLM or how hard you work.

I have tried being in an MLM, but I prefer affiliate marketing because it’s way less stressful. Like most people, I lost money when I was in an MLM. Now, I make a consistent monthly income that continues to grow. And I’ve never had to host a Facebook party or recruit a single soul. If you’re interested, this is the training platform that showed me how to do everything step by step.

17 thoughts on “Is Ring Bomb Party MLM? [Can You Really Make Money with This?]”