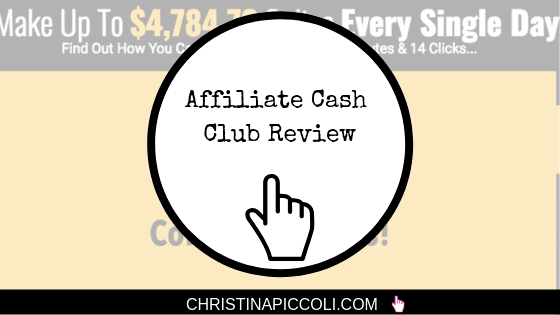 I'll give you a clue right off the bat.

It's probably not a scam.

But it's not good either.

I wouldn't recommend it just based on what the sales video tells us.

You don't have to take my word for it, but I've been reviewing these types of products for quite a while now. You can tell when something is good versus when it isn't.

Sorry to say, this one isn't.

Are you tired of products that don't deliver? Do you just want a REAL solution once and for all? Check out my free guide.

GRAB THIS --> HOW TO: AFFILIATE MARKETING FOR BEGINNERS

Product: Affiliate Cash Club
Cost: $37
Owner(s): ​Jordan Matthews (Fake name, and probably not this guy from the Eagles. Too bad. That would be awesome!)
Good For: No One

The sales page starts off by claiming that we can get started on our road to making over $4,000 per day in just 5 minutes and "14 clicks".

(One of these days, I'm going to join one of these programs and see how many clicks it actually takes.)

The sales video says that we have been invited to this page, and that it's our lucky day because we can access their "done-for-you" money-making system.

Existing users have been making up to $35,000 without any prior experience. You can see how much money our narrator, "Jordan" makes. He claims that making this money couldn't be easier. 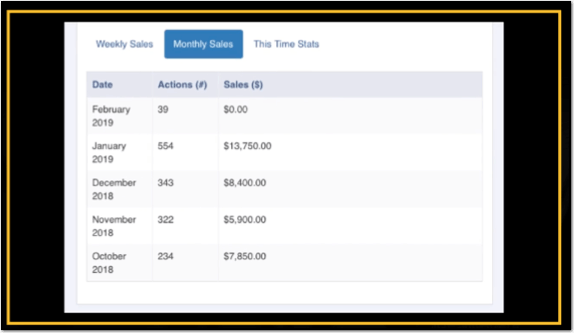 The video claims you don't need any fancy qualifications or special equipment to get started. You can start seeing profits with just 10 minutes of work per day.

This is of course, crazy, because anything you do that's actually worth it takes time and effort.

The sales video gives us a few testimonials. The first testimonial says that she joined affiliate cash club 2 weeks ago, and she's already made $20,000.

Our second testimonial claims that he only spends a few minutes on his laptop every day and he can make loads of money.

We've seen this Testimonial Guy many times in the past. In fact, I've seen him so much that I feel we're on a first-name basis. His name is actually Rob, and you can hire him for acting gigs on Fiverr.com. 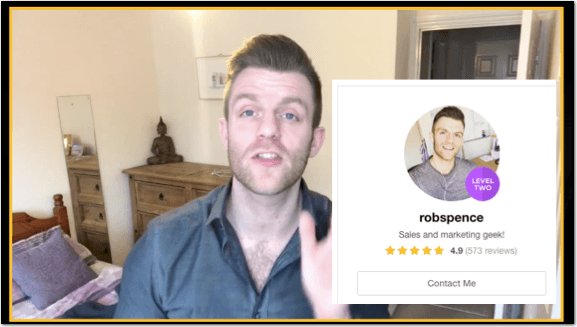 Rob has been in countless of these sales videos including:

That's just to name a few.

Our third testimonial is a real doozy. She says she's filming her testimonial from her hotel room in Sri Lanka. She says her favorite thing about affiliate cash club is that she can make money from anywhere in the world.

While this is a true statement of affiliate marketing, (you CAN make money from anywhere in the world) this is not true for this particular woman. She's another actress from Fiverr and she's standing in front of a green screen. (It's pretty obvious if you watch the video.) 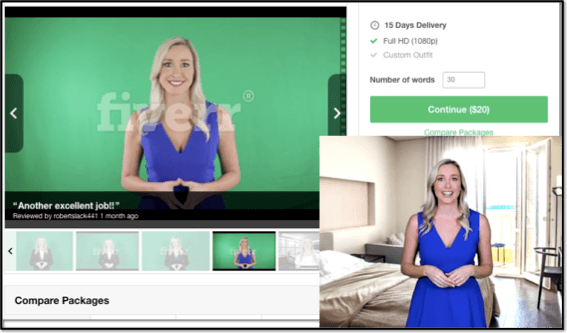 Our video goes on to ease our minds since they know we've heard all of this before. They claim this is a 100% legal opportunity to make money from other people's hard work.

The video goes on to explain that this is all about affiliate marketing, and that making money with this couldn't be more straightforward.

Affiliate marketing is a completely legitimate way to make money online, I agree. It's what I use on this site. However, it's not going to be as straightforward as they claim.

I'll explain why in a bit.

The video claims that you won't have to do anything complicated to make money with affiliate marketing because they have a "done-for-you" system. UGH. I'll explain why this isn't actually a good thing a little later.

Affiliate marketing is "easy" because: 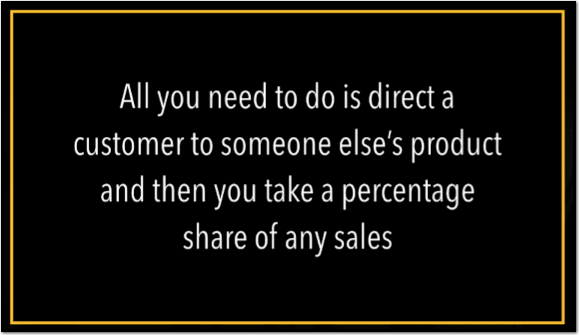 Our narrator, "Jordan", goes on to talk about how he discovered the Affiliate Cash Club and how this club is "exclusive". He said that once he found this club, he didn't have to do anything. He didn't have to set up a website, create a brand or figure out what products to sell.

He started seeing "mind-blowing profits" right away. He claims that he made over $10,000 his first week. 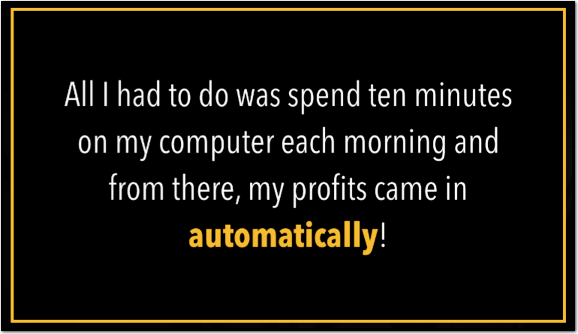 Jordan claims that you only need a laptop and a connection to the internet, and you're good to go to make money from Affiliate Cash Club. He says that you can get up and running in less than 30 minutes and start making money that same day.

That's not how this works.

Let's dig in a little more.

How Does Affiliate Cash Club Work?

From the sales video, we don't really know how Affiliate Cash Club works because they don't tell us or show us. Usually, when a product is worth buying, the sales video will give a demo so you can see the value of it.

What does it mean when the sales video doesn't show the product? Does that mean the product's quality is low?

Even though we don't exactly know what this is about, I've reviewed enough of these videos to have a good idea.

We know that it involves:

It sounds great and all, but it's not.

Is Affiliate Cash Club a Scam or Legit?

But the sales video is scammy and, if this is a true done-for-you system, I would recommend that you stay away. Keep reading for the details of why this is. 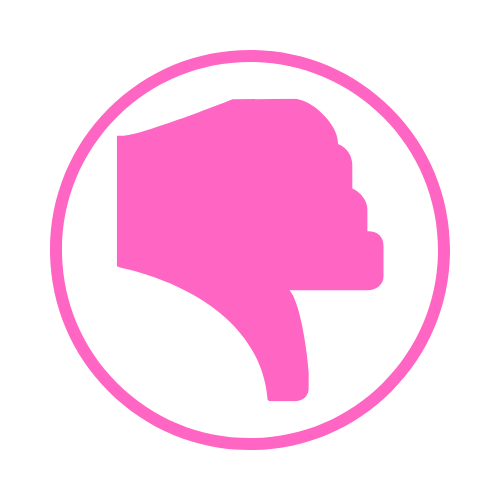 Why Done-for-You Systems are a Terrible Idea

I have talked about this quite a bit in some other reviews I've done. For instance, Your Easy Business, CB Passive Income, and Steal My System all claim to use done-for-you systems.

While they may seem like a great idea because everything's already set up for you, there are quite a few problems with this.

2. Your source of income is done, IF you could get a source of income going with this. But you probably can't because Google will never let this site rank. It looks like too many other sites, and that's considered duplicate content. So you won't be able to get free traffic from the search engines.

3. You can try to get free social media traffic, but because these sites look like giant ads, you will be ignored on social media.

4. You could pay for traffic, but again, Google is not going to like you linking to a site like this and it might be hard to even get approved. Not only that, but you could pay A LOT for traffic and never see a return. It's risky.

I really do not recommend Affiliate Cash Club, but I'm leaving the link here anyway because I know some of you will be too curious to not check it out.

Go here to see Affiliate Cash Club for yourself.

However, I have a much better alternative for you.

Create Your OWN Affiliate Marketing Site

You, as the affiliate marketer, would join their programs, promote their products and get a commission on anything that you sold.

(Here's my Free Guide, How To: Affiliate Marketing for Beginners, if you want to learn more.)

It's great because you leave all the customer service and product stuff (like packing and shipping) to the company. You just promote and collect a commission.

It's still great for the companies too because they can have multiple sales people out there promoting their products. They don't need to pay them a salary, just a piece of the sales.

I personally love this business because I'm a mom and it allows me to have a flexible schedule and work around what my kids are doing. I don't need to be on the phone and I can work when and where I want. (In my slippers, usually.)

And in the end, you have your OWN property on the web. No one can take that from you.

What's even better is that once you learn how to set up one, you can set up multiple sites and have multiple streams of income. The possibilities are endless.

It will take some work upfront, but it'll be worth it in the long run. You'll see.

I also said that they include web hosting. That's generous because I just mean that you'll get a free website that they put together for you. Paid members at Wealthy Affiliate get actual state-of-the-art hosting for up to 25 of your own websites.

If you're serious about making money with affiliate marketing, then I really encourage you to learn how to make own website. It'll be an asset that you can keep forever. (Or even sell it down the road if you wish.)

Learn how to do this the right way so that you can secure an income for your future. Affiliate Cash Club may help you make an income in the short-term (although I highly doubt it), but...

Any cookies that may not be particularly necessary for the website to function and is used specifically to collect user personal data via analytics, ads, other embedded contents are termed as non-necessary cookies. It is mandatory to procure user consent prior to running these cookies on your website.